Neuro Linguistic Programming or NLP is something I just recently stumbled upon. It can be a bit confusing at first but it sounds like something I’d like to try and I wanted to share a bit about it. 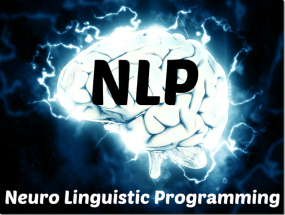 What is NLP: Neuro Linguistic Programming?


Neuro-linguistic programming (NLP) is an approach to communication, personal development, and psychotherapy created by Richard Bandler and John Grinder in California, United States in the 1970s. […] NLP’s creators claim there is a connection between neurological processes (neuro-), language (linguistic) and behavioral patterns learned through experience (programming), and that these can be changed to achieve specific goals in life


If that seems very confusing, don’t worry. I find the more I read about NLP the more I understand it.
Basically there are a set of practices you can do to acheive results whether it be freedom from depression and anxiety or just the negative thoughts every person has from time to time.
You should know that not all of these ideas can be proven through science and probably because of that, certain people and groups discredit NLP. However there is nothing harmful about using NLP and besides, sometimes if you believe something helps, it helps.

Anchors are used to change the feelings/thoughts surrounding a particular situation. You know how sometimes if a person is wearing something specific and they win a competition they start to think of that item as lucky? Whether or not it has any actual luck in it doesn’t matter. The person associates said item with luck and so when they wear it in the future, they feel more lucky.
Anchors are like that but you can make them intentionally too. So if you create a few anchors like a calming stone you can hold or a joyful necklace, you can train your brain to change how you’re feeling when you have those anchors with you.

There is another one that involves remembering something negative that happened (and that you think about often) and looking at it again from a third person’s perspective, as if you are a movie director. You can zoom in and out, change the view, focus on certain things and unfocus on others.
Manipulate the memory, take the focus off the main part and focus on smaller, average things such as the flowers in the vase behind you or the dog barking at your feet. Doing this enough makes the memory seem distant and non important, stopping your brain from going back to it again and again.

There is way more to it than that. I am still learning but I think it’s an interesting way to try to change your thinking. I wish I had heard of it sooner! There are some resources below if you wish to know more. The free ebook is pretty good and if after that you want to learn more, you might want the other books. Just remember that it can seem confusing at first but keep reading.

The Difference Between Angry and Mad

How many times have you heard people use the word angry and mad interchangeably (me included) when there really is a difference between angry and mad.

Difference Between Angry and Mad

While there is technically a difference between being angry and mad, it’s not that big of a deal if you say you are mad when you mean angry, especially if you live in North America.
Although I will be explaining a bit behind the meaning of the words, this post is about dealing with your anger as much as it is about the correct grammar.

Angry
1. Having a strong feeling of or showing annoyance, displeasure or hostility; full of anger.
Some synonyms: irate, cross, vexed, incense, infuriated, etc.
He makes me so angry.
I get angry when she does that.
Mad
1. mentally ill, insane
Some synonyms: crazed, psychotic,
She felt as if she was going mad.
He could feel the madness welling up inside of him.
If you live in England you will hear the word mad used to mean mentally ill more than you will in North America but the meaning is still the same.


How Angry and Mad Got Mixed Up

So how did people start using the word mad when they mean angry?
Unfortunately a lot of people have trouble with their anger and instead of expressing it well, as soon as it bothers them, they do a number of different things to not express it from bottling it all up quietly inside of them, to acting passive aggressive (e.g. the person who says nothing is wrong but gives you the cold shoulder) to the person who takes the anger out on the wrong person.
When they do this, anger tends to build inside of them and act like a poison to their body. They are not expressing their anger in a healthy way and so it can feel like they are going mad (insane) because their anger is building inside of them and affecting their mental health.
This seems to be the way that the word became known to be about anger.
“To feel and to express anger healthily is actually the antithesis of madness.” – The Angry Book by Theodore I Rubin, M.D.


Not Letting Anger Turn to Madness

I have no idea what the actual stats are but I do know that many people struggle with anger problems.
The Angry Book by Theodore I Rubin, M.D., although old, is a good resource for recognizing how you deal with anger. It shows the MANY and varied ways that people don’t deal with their anger in the best ways. Some are obvious but many you would not at first think have anything to do with anger.
You might be surprised to see how your behaviours might be betraying a long standing “slush fund” of past anger. Slush fund is the term used in the book to indicate the built up anger inside of you.
Definitely if your anger often seems stronger or more potent than would make sense for that situation, is very frequent, hurts your relationships or makes you act violently than you definitely are having troubles with your anger.
Seek help with your psychiatrist, doctor, counsellor or a trusted family member or friend if you are worried.
NOTE: I have reviewed the book I mentioned above at one of my other blogs if you are interested you can read my review of The Angry Book.
Posted by Kathleen at 8:57 PM No comments: